Nubbins Sawyer, also known as The Hitchhiker, appears in The Texas Chain Saw Massacre and its prequel Leatherface. He is a mentally unstable and murderous cannibal and grave robber; he lives with his equally depraved family in the back roads of Texas, capturing, torturing and feasting on unwary travelers.

Though sadistic and violent, he is generally one of the least threatening characters in the movie, being not very intelligent, and behaving erratically. The character also has a bizarre speech impediment and a large birth mark on the side of his face. His speech impediment came from the actor who portrayed him, Edwin Neal, who played the hitchhiker as someone who suffered from schizophrenia.

As a child, Nubbins is seen celebrating Jed’s birthday. He and the rest of the family pressure Jed to kill a man accused of stealing their pigs. Nubbins claps in joy but is disappointed when Jed refuses.

When Jed lures Betty Hartman into the Sawyer barn, she falls into a trap and her body is severely broken. Drayton and Nubbins appear and Drayton has Nubbins drop an engine which crushes and instantly kills her.

A decade later, Nubbins is seen as a teenager at the Sawyer Residence when the corrupt Deputy Sorells arrives with information on Jed. Nubbins informs Verna of his presence. After Sorells tells them that Hal Hartman has Jed at the old barn, Verna betrays him and has Drayton and Nubbins feed him to the pigs before going after Jed. The family arrives at the barn and retrieves Jed, taking Hartman and Lizzy the nurse captive. After stitching the remnants of Jedidiah's face, Verna tells Nubbins to make him something to eat. When Hartman and Lizzy try to escape, Nubbins and Drayton, respectively, capture them. Nubbins throws Hartman down and watches as Jed kills him with a chainsaw. As Lizzy flees into the woods, Verna sends Nubbins, Drayton, and Jed after her. Nubbins searches for her, wielding a knife, but Jed ultimately gets her. The next morning Nubbins and Drayton feed the victims’ remains to the pigs.

As he is walking along a road, he is picked up by a group of friends traveling through the area, who feel sorry for him having to walk in the heat.

The group asks him what he was doing out there and he tells them that he was "over at the slaughterhouse" where he and "his brother" and "his grandfather" used to work. He shows them pictures of he and his family killing the cattle while telling them a story about how headcheese comes from the cows there when their heads are melted, all the while attempting to get them to drop him off at his home and even inviting them to dinner. He soon begins acting erratically after being given back the photographs by the disgusted travelers. The Hitchhiker suddenly pulls Franklin's pocket knife out of his grasp after he sees the crippled teen picking his fingernails with it. The group is shocked and appalled when the Hitchhiker uses Franklin's knife to cut open the palm of his own hand. Shortly after, the Hitchhiker shows-off the straight razor he keeps in his boot and then takes a picture of Franklin using a camera he pulls out of his satchel. After Franklin refuses to buy the picture, the Hitchhiker sets the photo on fire and slashes Franklin's arm with the straight razor before being kicked out of the van. The Hitchhiker briefly chases after the van, kicking and yelling as he smears a bloody handprint onto the side of the vehicle but soon relinquishes his attack on it. The smeared blood on the van was a symbol for Drayton to see which marked the teenagers' van as a target for murder.

The film later identifies the Hitchhiker as the brother of Leatherface and the son of Drayton Sawyer, part of a family of mentally unstable and murderous cannibals. It's also revealed that he was the one responsible for the grave robberies mentioned at the beginning of the film. He was taking photographs of decomposed corpses and making horrific art and statues out of them at the cemetery. Together, they torment Sally Hardesty, Franklin's sister whom Drayton had captured. Eventually deciding to kill Sally, the Hitchhiker, Drayton and Leatherface are at first content to allow their highly-regarded Grandpa to do so, but when Grandpa proves unable to kill Sally with a hammer, the Hitchhiker and his family become impatient and over-eager with trying to help him. The Hitchhiker forgets to keep a hold on Sally when he tries to take the hammer from Grandpa, allowing her break free of their grasp and jump out a nearby window; as Sally flees, the Hitchhiker and Leatherface give chase to her, with the Hitchhiker catching up to her on a road. While slashing Sally with a knife, the Hitchhiker meets his demise when he is run over by an 18-wheeler. 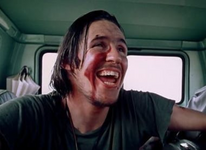 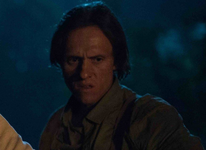 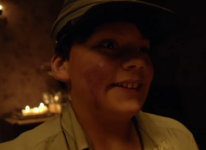